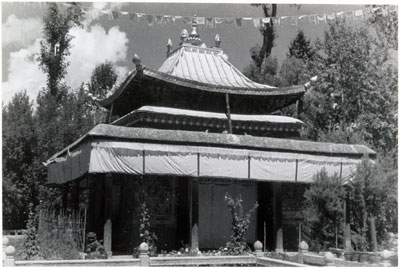 The 'Serpent Palace' in the grounds of the Norbu Lingka. Prayer flags can be seen suspended above the roof of the building and the causeway across the lake providing entry to the building can be seen in the foreground

Notes on print/mount - 'Norbu Lingka has been written beneath the images on page 17 in the album in pencil, apparently not by Hugh Richardson [MS 12/06/2006]

Other Information - Album: This image appears alongside three other images of the Norbu Lingka on page 17 of Hugh Richardson's album 'Lhasa 1936' [MS 12/06/2006]

Other Information - Related Images: Images prefixed with 'CC' comprise a group of negatives containing images of the Nepalese guard at Gyantse fort, Tsarong’s house, part of Potala and flooded plain of Lhasa, the aqueduct, ‘Lake’ palace and causeway, lake at Norbu Lingka and birds on lake. They all seem to have been taken between 2nd - 6th September, mainly on the occasion of the first official visit of the Mission party to the Potala and Norbu Lingka [MS 12/06/2006]