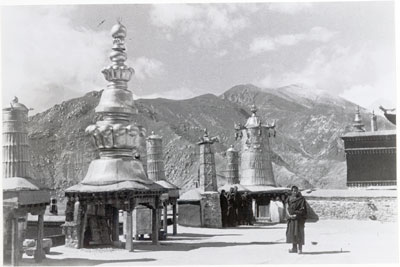 Although Hugh Richardson refers to this image as having been taken in Drepung Monastery, in fact it seems to have been taken from the roof of the Assembly Hall at Sera Monastery. Large golden emblems can be see above the entrance doorway on the roof with a young monk standing nearby in the bottom right of the frame

Notes on print/mount - 'Drepung boy' has been written beneath the image in the album in pencil, apparently not by Hugh Richardson