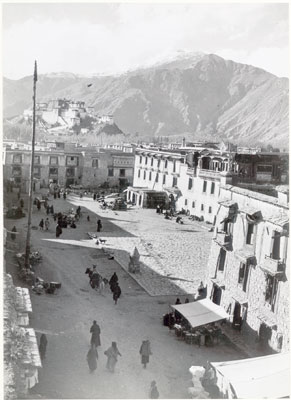 Street scene in Lhasa looking west towards the Kashag or Cabinet building in the centre, and the main square leading from the Jokhang temple. The Potala can be seen in the distance in the upper left of the image and a large prayer pole can be seen in the middle left of frame, the Kesang Darchen. Houses and stalls on the barkhor can be seen On the day on which this photograph was taken, the Mission had lunched with the Chikyak Khenpo and a few members had then gone into the centre of the town to take images of the rooftops and of the Chinese wireless aerial in order to make an assessment of it

Notes on print/mount - 'Lhasa street scene (Cathedral Square S.)' has been written beneath the image in the album in pencil, apparently not by Hugh Richardson [MS 10/06/2006]

Manual Catalogues - Caption in Chapman's hand-written list of negatives made whilst on the Mission to Lhasa, 1936-7 [See PRM Manuscripts Collection]: 'Ditto [View down onto Lhasa city (note p. poles and yaks tail)] looking w. (from same place)'; PRM Manuscripts Collection: ‘List of Tibetan Prints and Negatives’ - Book 1, From Gangtok to the Natu La August 1936: ‘37/3 - View up same street in opposite direction with Potala in distance. On right is Kashag (Cabinet) building. Holy Mountain (18,500) in far distance’ [MS 10/06/2006]