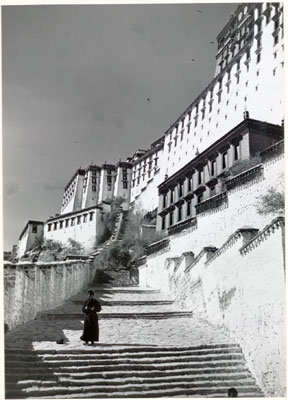 The outer steps of the Potala on the south side of the building. A man can be seen in the bottom left of the image. The photograph emphasises the height, proportions and angularity of the Potala

Notes on print/mount - 'Potala steps' has been written beneath the image in the album in pencil, apparently not by Hugh Richardson [MS 10/06/2006]

Manual Catalogues - Caption in Chapman's hand-written list of negatives made whilst on the Mission to Lhasa, 1936-7 [See PRM Manuscripts Collection]: 'Man on outer steps of P. [Potala] which disappears top rt. (man on left)'; PRM Manuscripts Collection: ‘List of Tibetan Prints and Negatives’ - Book 2: ‘4/4 - Part of staircase up southern side of Potala’ [MS 10/06/2006]