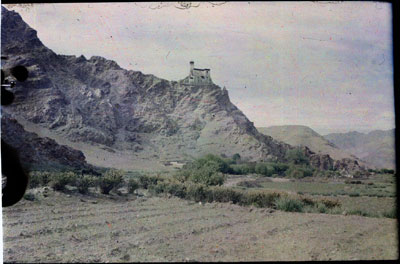 The ancient palace of Yumbu lakhar situated on a craggy rock in the Yarlung valley. The tower is topped by a gilded rgya-phibs canopy. There are cultivated fields in the foreground.

Other Information - Setting: Richardson describes this site in High Peaks, Pure Earth , London, Serindia Publications, 1998, p. 319. "Further south [of Khra 'brug in the Yarlung valley] is Yum-bu Bla-mkhar (1949), the ancient palace of the Tibetan kings, prominent on a rocky hill. It is a narrow rectangular building with a slender white tower topped by a gilded rgya-phibs canopy. By tradition it was founded by the mythical king Nya-khri Btsan-po and it is associated, rather more possibly , with king Tho-tho-ri who may be placed tentatively in the middle of the fifth century. Legend has it that in his reign the first Buddhist books fell from heaven onto the roof of the palace, though they could not be understoood at the time. The story gives sanctity to the building which, which is approached by a narrow path up a steep hill and entered through a low door beyond which a steep ladder leads to the first floor. ..." [KC 17/10/2006]