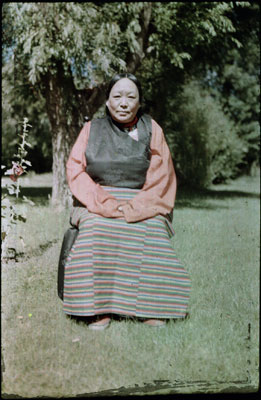 Lhalu Lhacham seated on chair in a garden. She is wearing a silk robe, a striped apron and felt boots.

Clare harris 2003: Lhacham Lhalu, was one of the “first ladies” of Tibet as her father and late husband had both been Dukes, a title only awarded to those related to a Dalai Lama. The family home, the Lhalu mansion on the outskirts of Lhasa, was the headquarters of the Younghusband Expedition to Lhasa in 1904. The house had its own private monastery in which the 13th Dalai Lama would often meditate. By the 1930s she was a popular figure in the social world of Lhasa and one of the few Tibetan women to host parties for the British. Spencer Chapman (1938:319) noted that “ The lady of Lhalu was of middle age and extremely stout. She wore the most wonderful jewellery, and was more made-up than any Tibetan woman I had seen”. “Our hostess was wonderfully good company. … The lunch was excellent but our indefatigable hostess made us eat far more than we wanted, and absolutely forced us to drink quantities of excellent but potent chang.” (Tibetan beer) [KC 16/10/2006]

Other Information - Lhalu Lhacham is mentioned in Luciano Petech,'s Aristocracy and Government in Tibet 1728-1959 , Serie Orientale Roma XLV, Roma: Is. M.E.O, 1973 pp. 48-9. "The Lha-klu lha-cham i.e the widow of the old duke, remained unmarried for some years. She had fallen in love with rtsis-dpon Lung-shar, one of the most influential men in Tibet. A marriage was out of the question, as it would have meant the extinction of one of the two houses. Thus in about 1924 in order to ensure the survival of the Lha-klu family, she adopted Lung-shar's younger son, aged 14, by name Tshe-dbang rdo-rje (b.c. 1910). ... Lha-klu lha-cham, the real mainstay of the family ... died in Lhasa a few years after 1959." [KC 16/10/2006]