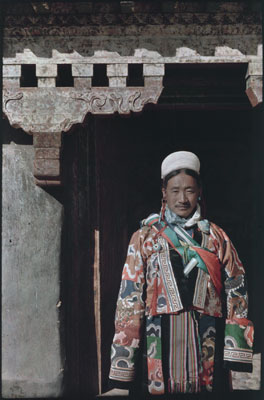 Manual Catalogues - Typewritten handlist entitled 'Hugh Richardson Collection, The British Museum. Photographs taken between 1936-50. Cameras: Zeiss Super Ikonta, Reflex Korelle. 300 colour slides (Dufay colour); copies made Jan. 1995.
[no.] 32. Ringgang, also known as Changngopoa, an assistant in the Foreign Office and an interpreter and secretary. He was one of the boys sent to Rugby School in 1913 by the 13th Dalai Lama on advice from Sir Charles Bell. His dress is called Geluche (see HR's Ceremonies of the Lhasa Year) . The scarf, as with the robes of the monks, goes over the left shoulder, leaving the right shoulder free.' [KC 09/10/2006]

Research publication - Seeing Lhasa , Chicago: Serindia Publications, 2003, p. 158. Caption reads," Ringang in New Year Dress . Chang Ngopa Rinzin Dorje (known as Ringang; 1904-1945) wearing gyaluche dress - the ceremonial dress worn at new Year and beleived to have been worn by the Yarlung dynasty rulers of Tibet (7th-9th centuries AD). Ringang was translator to the Kashag (Tibetan Cabinet) and the Magistrate at Purang, a district in southern Tibet. By 1936, he was an official of the 6th rank, which meant that he could normally only wear silk in his own home and was not entitled to wear the amulet box which higher officials wore on their heads. In 1913, he had been one of the Tibetan boys sent (by Charles Bell and the 13th Dalai Lama) to be educated at Rugby School in England. On his return he was responsible for installing electricity in Lhasa. At the time of the 14th Dalai Lama's Installation in 1940, Ringang was a civil officer in charge of organising and commanding the 600-strong cavalry that attended the event. Basil Gould noted: 'As District Magistrate of a distant part of Tibet (where his wife sometimes discharged his duties),engineer of the mint and of the hydro-electric installation and interpreter to the Cabinet, he had his arms full." [KC 14/10/2006]