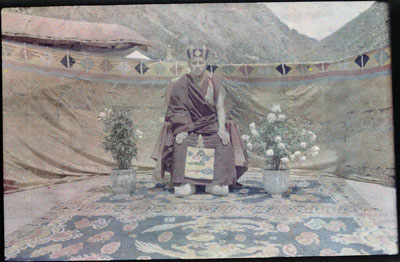 The 16th Gyalwa Karmapa Rangjung Rigpe Dorje (1924-1981) wearing the black crown (shwa nag) of the Kagyud order of Buddhism seated on chair in a makeshift studio at Tsurphu monastery. There are flower pots on the ground beside him. There is a silk hanging behind him and carpets with a dragon motif on the ground.