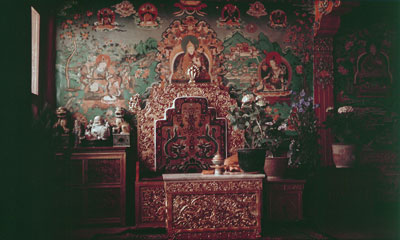 The Dalai Lama's sitting room in the Kesang Podrang palace at Norbu Lingka. There is an ornately carved wooden throne in the centre of the image with a fine, detailed painting which includes an image of the fifth Dalai Lama, behind it. There is an ornately carved wooden table with a tea cup in front of the throne and pots of flowers to the right and a table with small statues on the left.

Manual Catalogues - Typewritten handlist entitled 'Hugh Richardson Collection, The British Museum. Photographs taken between 1936-50. Cameras: Zeiss Super Ikonta, Reflex Korelle. 300 colour slides (Dufay colour); copies made Jan. 1995.
[no.] 20. The Dalai Lama's sitting room in the Kesang Phodrang Palace at Norbulingka. An image of the Fifth Dalai Lama is above the throne. This picture was taken before 1940; the 14th Dalai Lama arrived in Lhasa in October 1940.' [KC 09/10/2006]