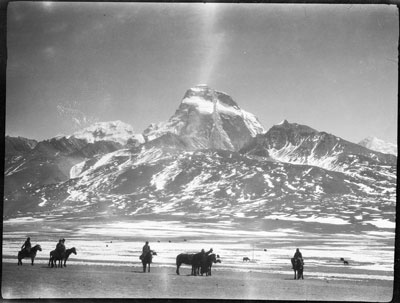 Mount Chomolhari seen from the top of the Thang La. A. J. Hopkinson's transport can be seen in the foreground while yaks are grazing in the distance

Notes on print/mount - One contact print made from this negative is contained in A. J. Hopkinson's negative case with the negative. The print was made using Velox paper. The name 'A. J. Hopkinson' has been written on the back of the print in pencil, as has the reference 'G.48' [MS 19/08/2006]

Other Information - Description: [Extract from taped interview, Richard Blurton and Mrs Hopkinson] '48 - The peak of Chomolhari having just crossed the Tang-la (a sloping pass), with yaks grazing in the foreground along with the transport for AJH's [Hopkinson's] party; seen from the plain of Phari (the southwest)' [MS 12/08/2006]