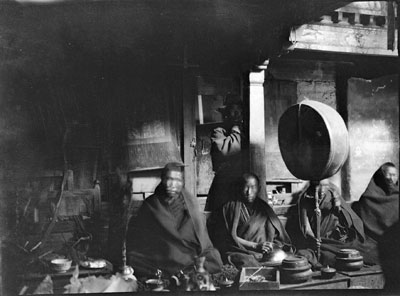 Monks at a ceremony inside a monastery in or near Gyantse. The monks out of focus on the right are playing or holding musical instruments such as cymbals, horns and drums. A large number of ritual offerings can be seen, as well as thangka around the walls.

Other Information - Description: [Extract from taped interview, Richard Blurton and Mrs Hopkinson] '87 - very similar to 86 [BMH.F.86.1], but note the figure who has appeared in the background leaning against the pillar - a lay-man with a (?) Ladakh-type hat. Hanging up on the wall seems to be a chatelaine with a steel and pouch. The monk with the upright drum in in the process of beating it with one of the question mark-shaped beaters. These interior shots of a shrine may be either from the main temple in Gyantse, or from the small gompa at the head of the bridge - this would be closest to the Fort' [MS 11/08/2006]