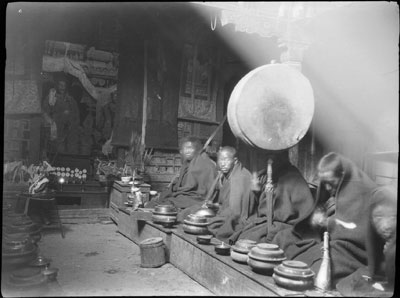 Monks at a ceremony inside a monastery in or near Gyantse. The monks out of focus on the right are playing or holding musical instruments such as cymbals, horns and drums. A large number of ritual offerings can be seen, as well as thangka around the walls.

Other Information - Description: [Extract from taped interview, Richard Blurton and Mrs Hopkinson] '85 - the same as 84 [BMH.F.84.1], but from slightly different position. Note the large upright drum and the metal trumpet resting in the lap of the nearest monk' [MS 11/08/2006]