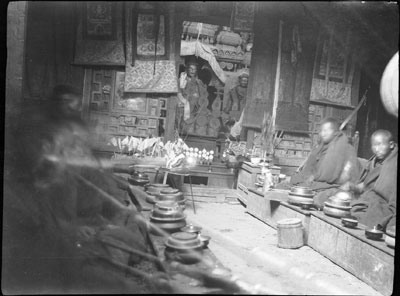 Monks at a ceremony inside a monastery in or near Gyantse. The monks out of focus on the left are playing long horns. A large number of ritual offerings can be seen, as well as thangka around the walls.

Notes on print/mount - One contact print made from this negative is contained in A. J. Hopkinson's negative case with the negative. The print was made using Velox paper. The caption 'F.84' has been written on the back of the print in pencil, as has the reference 'F.84' [MS 11/08/2006]

Other Information - Description: [Extract from taped interview, Richard Blurton and Mrs Hopkinson] '84 - interior of a shrine during a service being performed by two rows of monks - those in the foreground (blurred), holding trumpets. Many elements of religious paraphernalia visible - thang-ka , lamps, cymbals, ghanta , torma , tea- and tsampa -bowls, a spirit catcher, water receptacles with peacock feathers, and fine wood carving (partly visible). The two images on the main altar appear to be Padmasambhava and the Buddha. Mrs H. [Hopkinson] mentions that most thang-ka that came on the market were all slightly damaged especially after the XIII Dalai Lama managed to tighten up monastic discipline on his return from exile in India' [MS 11/08/2006]