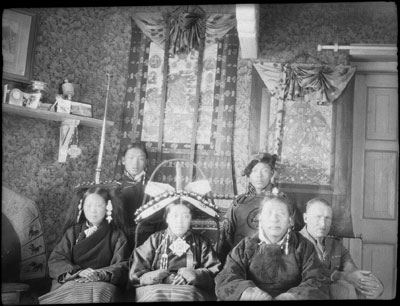 The Taring family and Captain Dean in A. J. Hopkinson's room in Gyantse Fort. Back row left to right: Shime Taring, Jigme Taring. Front row left to right: Mrs Pemba, Miss Taring, Taring Raja, Captain Dean. Various ornaments collected by A. J. Hopkinson can be seen in his room such as thangka and prayer wheels. A photograph of his future wife, Eleanor, can also be seen on the mantelpiece. The wall paper was imported from India

Other Information - Description: [Extract from taped interview, Richard Blurton and Mrs Hopkinson] '52 - taken in the room of Mr H. [Hopkinson] in the Fort, where he is entertaining. The guests are, left to right, Mrs Pemba, Miss Taring, Taring Raja and Captain Dean; also two younger people in the background - Shime and Jigme. Amongst other things seen there is a photograph of Mrs H. taken in the Lake District before she was engaged' [MS 10/08/2006]