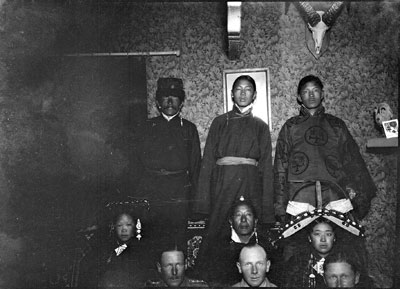 Mr and Mrs Pemba photographed in Gyantse. Pemba is wearing a brocade waistcoat while his wife wears a headdress decorated with corals and with other suspended ornaments typical of the Lhasa region

Biographical Information - [Extract from taped interview, Richard Blurton and Mrs Hopkinson for BMH.F.50.1] 'Mr and Mrs Pemba. They were both drowned in the Gyantse flood of 1949 (or 1950) - two local rivers (one coming down from Shigatse, the other from above Gyantse) which met at Gyantse were in flood at the same time with the result that the British Fort was swept away. The same flood carried away the painted wooden summer palace of the Tashi Lama further downstream' [MS 10/08/2006]