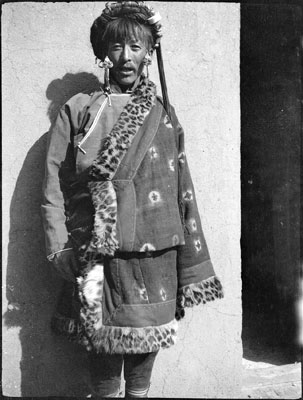 The syce or groom of Raja Taring. Photographed here at the Agency residence at the Fort . Hopkinson established a very good relationship with the Taring family and regularly dined with them. Many British officials were struck by the costume worn by syce, especially their tie-dyed chuba which were lined with snow leopard fur. Here, the elaborately ornamental earrings worn can also be seen

Notes on print/mount - One contact print made from this negative is contained in A. J. Hopkinson's negative case with the negative. The print was made using Velox paper. 'F.47' has been written on the back of the print in pencil, as well as the name 'A. J. Hopkinson' [MS 11/08/2006]

Other Information - Description: [Extract from taped interview, Richard Blurton and Mrs Hopkinson] '47 - Raja Taring's syce; he wears silver and turquoise earrings. The cloth of his chuba is a heavy dark red woolen cloth, with tie-dye decoration, and edged with snow leopard' [MS 10/08/2006]