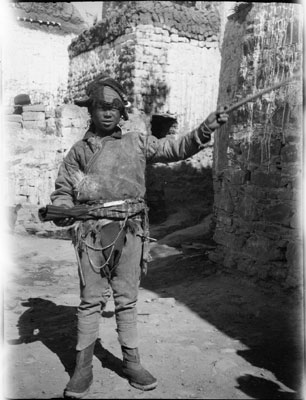 Hopkinson states that this muleteer surprised him in Gyantse bazaar by giving a military salute [see Notes]. It emerged that he had formerly been a soldier in the Tibetan army at Lhasa. Here he is seen wearing hide clothes with a textile belt from which a large number of implements are hanging

Notes on print/mount - One contact print made from this negative is contained in A. J. Hopkinson's negative case with the negative. The print was made using Velox paper. 'F.42' has been written on the back of the print in pencil, as well as in the top right corner on the front of the negative [MS 11/08/2006]

Other Information - Description: [Extract from taped interview, Richard Blurton and Mrs Hopkinson] '42 - a donkey driver, with a chain hanging around his waist from which is suspended a pouch, a flint and steel with tinder, and a knife. He carries a roll of cloth and is wearing the raw-hide jacket typical of the donkey drivers' [MS 10/08/2006]

Other Information - Description: Hopkinson gave a full description of his encounter with this man in his letters home: “The other day, when I was photographing in the Bazar, I photographed one very jungly looking individual, clad all in skins, his waist a perfect Christmas tree of gadgets, flints, and chains, and needles, and thimble [ sic ], and chop-sticks and knives; and at the end of it all he nearly knocked me over with surprise by doing a Guardsman’s salute - he had been in the Tibetan army at Lhassa” [A. J. Hopkinson Archive, OIOC British Library, Mss Eur D998/54, Journal Letters from Gyantse and Various Camps, 1927-28, commencing February 5th 1928, Gyantse, pages 2-3]. [MS 12/08/2006]

Other Information - Dates: This photograph may have been taken in late January or early February 1928. A. J. Hopkinson had clearly started to use his 'F' box of negatives in the early part of 1928 as he was able to send the first batch of photographs with this reference [F1 - F21] to Eleanor Hopkinson on February 2nd 1928 [A. J. Hopkinson Archive, OIOC British Library, Mss Eur D998/54, Journal Letters from Gyantse and Various Camps, 1927-28, commencing February 5th 1928, Gyantse, page 3]. In the same correspondence he also states that he has recently been taking a lot of photographs around Gyantse bazaar [ibid., pp. 2-3]. [MS 12/08/2006]