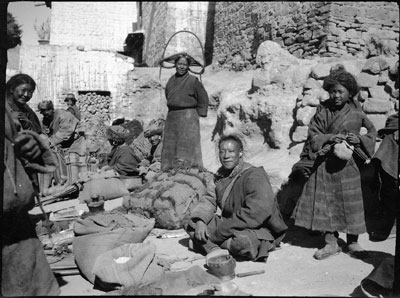 A street in Gyantse bazaar showing some of the stalls. In the right of the image a young girl is knitting. The trader sitting cross-legged in the centre of the frame appears to be selling salt

Notes on print/mount - One modern print made from this negative is contained in A. J. Hopkinson's negative case with the negative. The print was made using Ilford paper. The reference 'F.36' has been written on the front and back of the print [MS 11/08/2006]

Other Information - Description: [Extract from taped interview, Richard Blurton an

Other Information - Dates: This photograph may have been taken in late January or early February 1928. A. J. Hopkinson had clearly started to use his 'F' box of negatives in the early part of 1928 as he was able to send the first batch of photographs with this reference [F1 - F21] to Eleanor Hopkinson on February 2nd 1928 [A. J. Hopkinson Archive, OIOC British Library, Mss Eur D998/54, Journal Letters from Gyantse and Various Camps, 1927-28, commencing February 5th 1928, Gyantse, page 3]. In the same correspondence he also states that he has recently been taking a lot of photographs around Gyantse bazaar [ibid., pp. 2-3] [MS 12/08/2006]d Mrs Hopkinson] '36 - the bazaar at Gyantse - note the very fine teapot, and the girl knitting' [MS 10/08/2006]