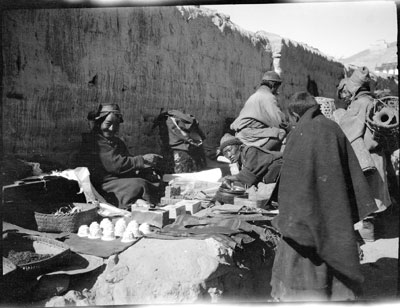 A street in Gyantse bazaar showing some of the stalls. The women traders can be seen selling a variety of goods including matches and brick tea

Notes on print/mount - One modern print made from this negative is contained in A. J. Hopkinson's negative case with the negative. The print was made using Ilford paper. The reference 'F.33' has been written on the front and back of the print [MS 11/08/2006]

Other Information - Description: [Extract from taped interview, Richard Blurton and Mrs Hopkinson] '33 - women selling matches and brick tea - amongst other things - in the bazaar at Gyantse' [MS 10/08/2006]