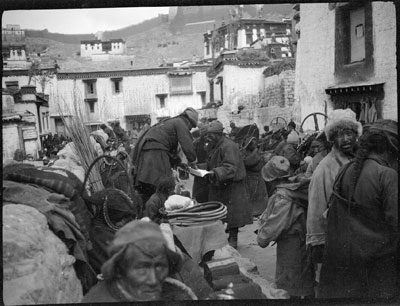 A street in Gyantse bazaar showing some of the stalls. In the lower centre of the image are hoops for sale that would be used to make the elaborated women's head-dresses typical of the Gyantse region. Buildings of Palkhor Chode monastery in the background

Notes on print/mount - One modern print made from this negative is contained in A. J. Hopkinson's negative case with the negative. The print was made using Ilford paper. The reference 'F.32' has been written on the front and back of the print [MS 11/08/2006]

Other Information - Description: [Extract from taped interview, Richard Blurton and Mrs Hopkinson] '32 - the bazaar at Gyantse. Note the hoops being sold, which are used in the making of the women's headdresses typical of southern Tibet. The buildings around are all part of the monastery; in the background the precinct wall (the red wall) of the monastery' [MS 10/08/2006]