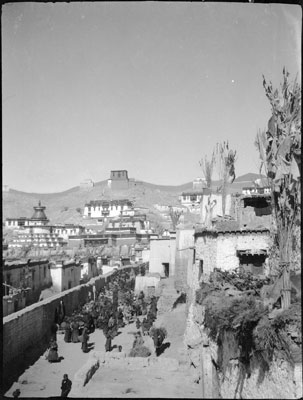 Notes on print/mount - One print made from this negative is contained in A. J. Hopkinson's negative case with the negative. The print was made using Velox paper. The caption 'Gyantse bazar' has been written on the back of the print in pencil as has the reference 'F.29'. The print also seems to have been used to prepare the image for reproduction as the instruction 'Full page' has been written on the back twice in pencil, as has the dimension '7" x 9"' in red wax crayon or pencil [MS 11/08/2006]