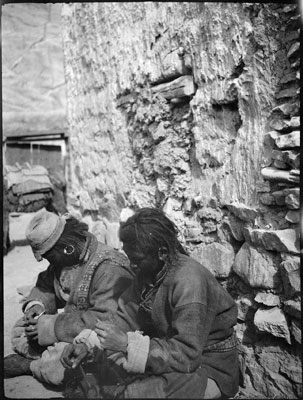 Two men spinning wool in Gyantse bazzar. They are seated against the exterior wall of a building as the wooden joists can be seen projecting through the wall above their heads. A saddled horse can be seen out of focus in the background. Both of the men are wearing hoop earrings and they both have pieces of decorated cloth either over their shoulder (man on left) or around their waist (man on right)

Other Information - Description: [Extract from taped interview, Richard Blurton and Mrs Hopkinson] '27 - two men in the bazaar spinning cord - note the spindles in their hands, and also the decorated cloth over the shoulders of one of them. It is probably part woven (the stripes) and part tie-dyed (between the stripes).' [MS 10/08/2006]