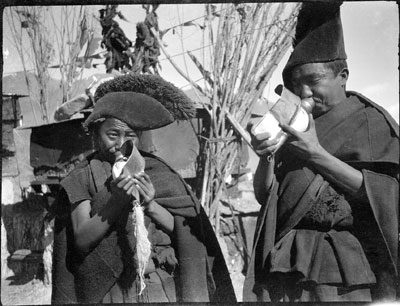 A group of monk musicians playing radung horns and other wind instruments in an unknown location near Gyantse. They are standing in front of red-painted walls while the Gyantse plain can be seen in the background.

Notes on print/mount - One contact print made from this negative is contained in A. J. Hopkinson's negative case with the negative. The print was made using Velox paper. The name 'A. J. Hopkinson' has been written on the back of the print in pencil, as has the reference 'F.11' [MS 11/08/2006]

Other Information - Description: [Extract from taped interview, Richard Blurton and Mrs Hopkinson] '11 - Ditto ['8 - monk musicians on the roof of the house of Chania. They are accompanying the reading of sacred texts. This recitation was often done as an act of piety, or if someone in the household was sick. Instruments included conches, shawms and the long expanding trumpets. Above them can be seen the spirit catchers. Once on the way to Shigatse, Mr and Mrs H. visited a small monastery where, laid out on a table in a narrow little courtyard, were amongst other things two dried up heads. Nobody was surprised at them, or knew what they were, other than that they might have been bandits who had been beheaded and their heads had been kept here to stop them escaping. Another gruesome curiosity was the stuffed yak which was sometimes located above the doorway in temples. To get in it was necessary to brush against it - presumably it was a guardian figure - see Lhalungpa L. 1983 p.136 (for dried human heads, see p.75)] [MS 04/08/2006]