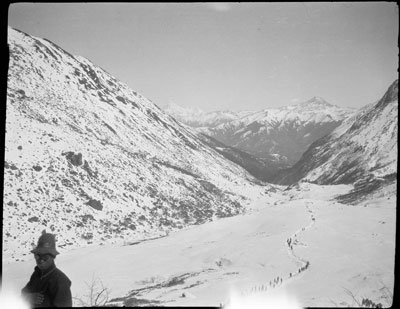 A line of porters attempts to create a car route in the snow along the Natu La, whilst others attempt to pull two Dodge cars (out of view). Colonel F. M. Bailey, the Political Officer of Sikkim, Bhutan and Tibet, wanted to introduce cars to the region to speed up communications between Gangtok and Gyantse. The project was bedevilled with problems and over the course of the year 1926-27 proved to be unfeasible, the cars being withdrawn late in 1927