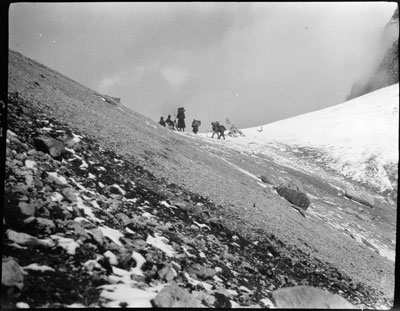 Crossing the summit of the Tangka La, one of the crossing points from the Chumbi Valley into Sikkim in the northern part of the Chumbi Valley. Porters carry heavy loads as they pass a small cairn of stones on their right. A. J. Hopkinson comments travelling on this route only once in his journals and diaries [see Notes] and it seems that this photograph may, therefore, have been taken on or around September 15th 1927 when he was en route from Yatung to Sikkim via Tangka La.

Notes on print/mount - One contact print made from this negative is contained in A. J. Hopkinson's negative case with the negative. The print was made using Velox paper. The caption "Approaching the summit Natu La" has been written on the back of the print in pencil, as have the references 'A. J. Hopkinson' and 'E.13' [MS 31/07/2006]

Other Information - Description: [Extract from taped interview, Richard Blurton and Mrs Hopkinson] '13 - coolies crossing the summit of the Tanka La, which is between Phari and the Dochen Tso' [MS 29/07/2006]