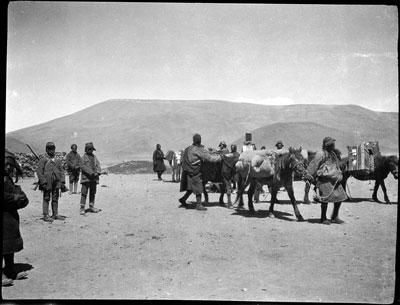 A. J. Hopkinson wrote in his journal for March 31st 1927 that on this day he left Tuna and marched across the plain and the Tang La to Phari. En route he came across a group of traders who originated from near Mount Everest, who were trading a herb called pangling which they intended to export to China via Calcutta. He also comments on their reluctance to be photographed [see Notes]. Here the traders can be seen with their pack donkeys walking across the plain, about to halt at a Tibetan house for a drink of chang