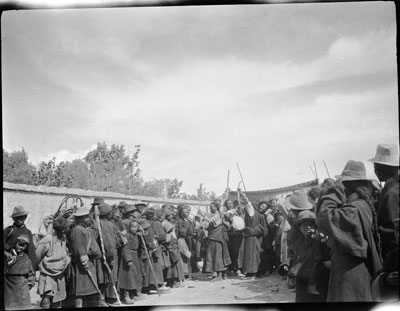 Crowds at the shooting contest. This photograph was taken on the occasion of the annual Gun and Arrow Competition at Gyantse in 1927. The site of the competition was close to the Paper Factory, about ten minutes from the Fort where the Agency staff stayed. Gyantse dzong can be seen in the background. Hopkinson commented in his journal for this day that he was fascinated by the crowd and took many photographs of the people he encountered [see Notes]. Here the crowd can be seen lined against a wall, possibly of the Paper Factory. The Gyantse-region head-dresses worn by the women can be seen in some detail. The men with the staves are officials whose job it is to keep the crowd in line whilst the competition takes place. Some of the competitors can be seen at the far end of the crowd holding their longbows

Other Information - Description: [Extract from taped interview, Richard Blurton and Mrs Hopkinson] 'Competitors. After each shot the bowstring breaks and must be replaced' [MS 03/07/2006]