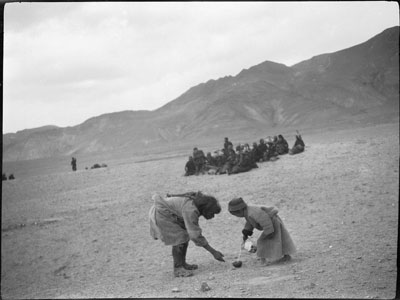 A beggar at the shooting contest receiving alms from a benefactor. This photograph was taken on the occasion of the annual Gun and Arrow Competition at Gyantse in 1927. The site of the competition was close to the Paper Factory, about ten minutes from the Fort where the Agency staff stayed. Hopkinson commented in his journal for this day that he was fascinated by the crowd and took many photographs of the people he encountered [see Notes]

Notes on print/mount - One contact print made from this negative is contained in A. J. Hopkinson's negative case with the negative. The caption "The successful Beggar. Beggar receiving alms' has been written on the back in pencil, as have the reference numbers 'C.39' and 'H6' [MS 03/07/2006]

Other Information - Description: [Extract from taped interview, Richard Blurton and Mrs Hopkinson] 'Giving alms to a beggar for food' [MS 03/07/2006]