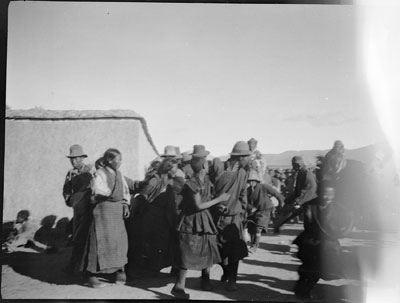 Part of the crowd at the annual Gun and Arrow Shooting competition at Gyantse. The competition took place in a large open space near the Gyantse paper factory on the outskirts of the town some ten minutes away from the Fort where the British Agency staff resided. Here, the crowd appears to be running or moving quickly away from something as it comes towards them, possibly the competitors on horseback seen behind

Other Information - Description: [Extract from taped interview, Richard Blurton and Mrs Hopkinson] 'They're all running' [MS 01/07/2006]

Other Information - Description: Hopkinson wrote of his visit to the Gun and Arrow competition: "The crowd at the Arrow Shooting was awfully interesting and I took heaps of photos” [A. J. Hopkinson Archive, OIOC British Library, Mss Eur D998/54, Journal Letters from Gyantse and Various Camps, 1927-28, commencing June 26th 1927, Gyantse, p.3]