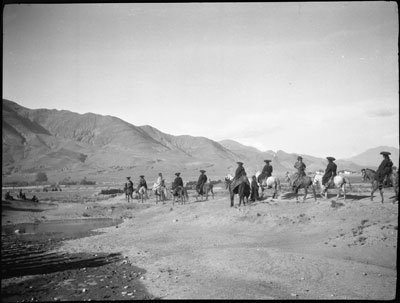 Officials and their servants on horseback at the annual Gun and Arrow Shooting competition at Gyantse. The competition took place in a large open space near the Gyantse paper factory on the outskirts of the town some ten minutes away from the Fort where the British Agency staff resided. The officials second from left and second from right respectively wear red tasselled hats and silk brocade outer garments. Small groups of onlookers line the route as it passes by the river

Other Information - Description: [Extract from taped interview, Richard Blurton and Mrs Hopkinson] Ditto as C.23 ['Judges process out to the competition; in their remarkable hats are mounted servants like the ones in Shigatse, official servants attached to the official judges'] [MS 01/07/2006]