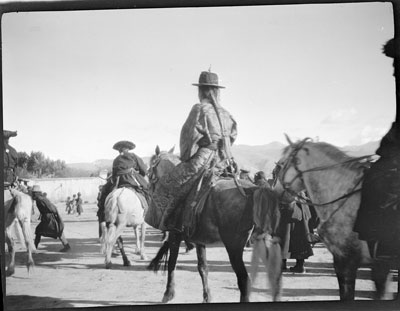 Officials and their servants on horseback at the annual Gun and Arrow Shooting competition at Gyantse. The competition took place in a large open space near the Gyantse paper factory on the outskirts of the town some ten minutes away from the Fort where the British Agency staff resided. The official in the centre of the image wears a red tasselled hat and a silk brocade outer garment

Other Information - Description: [Extract from taped interview, Richard Blurton and Mrs Hopkinson] 'He's got one of the wonderful hats, with red silk tassels hanging down, but it's different than the great wide ones. They all denoted rank of some sort [but I don't know what] I don't suppose my husband knew either. His dress is all Chinese brocade, with wave patterns. it could even be embroidered. Behind him is someone wearing one of those Bon hats. They were again officials, one of the set that had to keep order in the crowd' [MS 01/07/2006]