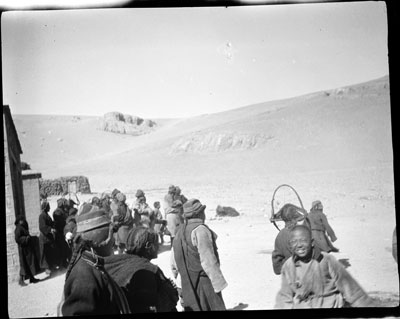 On March 8th 1927 Hopkinson and his aides left Phari by car and travelled to Dochen with much effort [see Notes]. The car had been the idea of the Political Officer Col. F. M. Bailey, who wanted to improve the speed of communications between Gangtok and the various offices of the Trade Agency in Tibet. In this image, the car had recently arrived at Dochen and some of the crowd that had gathering to watch its arrival can be seen regarding its progress out of frame

Notes on print/mount - One contact print made from this negative is contained in A. J. Hopkinson's negative case with the negative. The print appears to have been removed from an album, as there are traces of black mounting paper around the edges of the print as if it has been taken out after previously being glued in place. An indecipherable caption has been written on the back in pencil, as has the reference 'H12'. The number 'a6' has been written on the front top right corner in pencil and then erased, along with B33. [MS 29/06/2006]