Traders near the Yatung football pitch 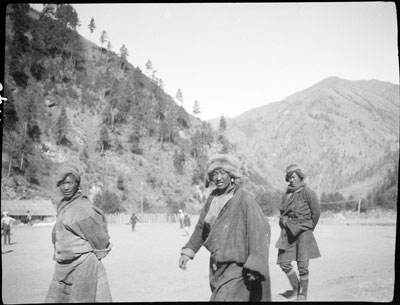 A group of men that A. J. Hopkinson describes as 'Traders' walking past the football pitch that the British Trade Agency staff developed in Yatung. The man in the centre is wearing a hat made of fox fur. A man in European dress and a Sikh man can be seen in the background; the goal is on the far right

Notes on print/mount - One contact print made from this negative is contained in A. J. Hopkinson's negative case with the negative. The print appears to have been removed from an album, as there are traces of black mounting paper around the edges of the print as if it has been taken out after previously being glued in place. A partially decipherable caption has been written on the back in pencil: "Traders passing football ground Shasima (in background) (they are driving [?] mule [?]". The number 3 has been written on the front top right corner in pencil.

Other Information - Description: [Extract from taped interview, Richard Blurton and Mrs Hopkinson] '70 - Yatung - note the man in the centre with his fox-skin cap who clearly comes from high Tibet' [MS 21/04/2006]