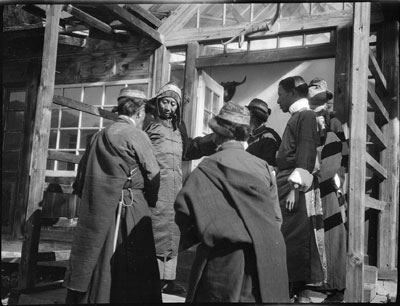 The Tibetan Trade Agent, Depon Miru Gyalwa, centre, surrounded by a group of Tibetan aides, Tami, Hopkinson's orderly in the background and Sub-Assistant Surgeon Bo Tsering on the right, standing in the porch of the British Trade Agent's house in Yatung. This photograph was probably taken shortly after Hopkinson arrived in Yatung and was the occasion of a return lunch that Hopkinson hosted for the Depon following a visit on the previous day to the Tibetan Trade Agent's residence in Pipitang

Notes on print/mount - One contact print made from this negative is contained in A. J. Hopkinson's negative case with the negative. The print appears to have been removed from an album, as there are traces of black mounting paper around the edges of the print as if it has been taken out after previously being glued in place. A partially decipherable caption has been written on the back in pencil: "The Depon [??] clothes in after lunch with me at Shasima (Tami in background)" [MS 26/06/2006]