The Taring family at home near Gyantse 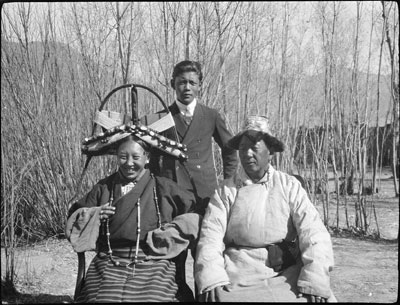 Taring Raja with his wife and son Jigme at home near Gyantse. They had invited Hopkinson and some of the Trade Agency staff to lunch at their house. This was the first time that Hopkinson had met the Taring family but he was instantly impressed by all the family members and went on to develop a good relationship with both the parents and the children. Rani Taring is here wearing an impressive Gyantse-region headdress adorned with pearls and corals. Jigme Taring, standing, is wearing a western style suit. He had been at St Paul's in Darjeeling, Sikkim

In Negative - 'A25' has been written on the left edge of the negative in black ink. The negative has been machine perforated along the left side. 20 holes have been perforated in total [MS 05/05/2006]

Notes on print/mount - One contact print made from this negative is contained in A. J. Hopkinson's negative case with the negative. The print appears to have been removed from an album, as there are traces of black mounting paper around the edges of the print as if it has been taken out after previously being glued in place. A partially decipherable caption has been written on the back in pencil: "Tering Raja and wife and Jigmed (son) (eldest brother of Maharaja of Sikkim)". The number 5 has been written on the front top right corner in pencil and then partly erased [MS 24/06/2006]

Other Information - Description: [Extract from taped interview, Richard Blurton and Mrs Hopkinson] '25 - Mr and Mrs Taring with their son' [MS 21/04/2006]