Monks at Cholung Ritro, near Gyantse 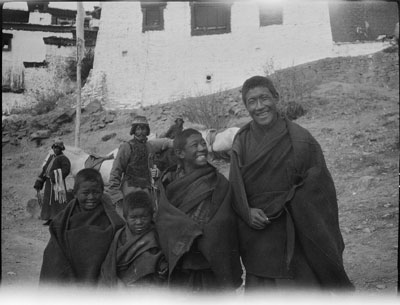 Monks at Cholung Ritro or hermitage to the north east of Gyantse. Rai Sahib Tsering Wangdi, Hopkinson's aide and Head Tibetan Clerk at Gyantse can be seen in the middle distance in a brocade waistcoat and his head chaprassis, Pasang, can be seen in the backgrond holding a khatak or offering scarf. Hopkinson had visited Cholung to to ask permission to transplant some of the wild roses that grew there in the spring [A. J. Hopkinson Archive, OIOC British Library, Mss Eur D998/53, Letters mainly from Gyantse 1926-27, Diary January 16th dated Gyantse 21 Jan 1927, 1927, page A-C]

In Negative - 'A15' has been written on the right edge of the negative in black ink. The negative has been machine perforated down the left hand side. 15 holes have been perforated in total [MS 05/05/2006]

Notes on print/mount - One contact print made from this negative is contained in A. J. Hopkinson's negative case with the negative. The print appears to have been removed from an album, as there are traces of black mounting paper around the edges of the print as if it has been taken out after previously being glued in place. A partially decipherable caption has been written on the back in pencil: "Some of the monks of the Ri-ton (Rai Sahib Wangdi and Passang behind, Monks in front - A15". The number 2 has been written on the front top right corner in pencil. [MS 24/06/2006]

Other Information - Description: [Extract from taped interview, Richard Blurton and Mrs Hopkinson] '15 - group of young monks with Rai Sahib Wangdi in the background. Probably the same monastery as above. The white horse is AJH's [Hopkinson's] mount' [MS 21/04/2006]