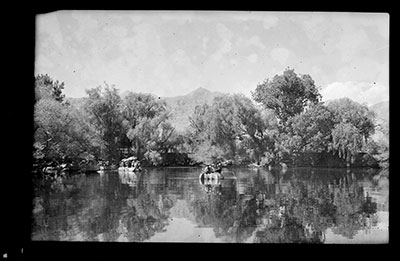 Officials being rowed in coracle boats on the Lukhang lake behind the Potala on the occasion of the Dzamling Chisang ('dzam gling spyi bsangs) festival which took place on the fifteenth day of the fifth month.

Manual Catalogues - Notes on Richardson's typed handlist: 'Album A - Nos. 81-3. ''Dzam gling spyi bsangs. The Kashag and other high officials are rowed around the Klu-khang temple in the middle of a lake to the north of the Potala.' [KC 19/09/2006]

Other Information - Background: Richardson describes the festival of Dzamling Chisang in Ceremonies of the Lhasa Year , London: Serindia Publications, p.94, "The festival of Dzamling Chisang commemorates the preparation for the founding of the Samye monastery when Padmasambhava subjugated the gods, nagas (serpent spirits) and local deities and made them protectors of the Buddhist faith. ..." [KC 21/9/2006]

Other Information - Dates: Although Richardson first saw this ceremony in 1937 [Hugh Richardson Archive, Bodleian Library, University of Oxford, MS Or Richardson 3 folio 111], contact prints of the type of which this image was made seem to have been made between 1944-9. There are 46 images printed out on Velox paper with no batch number references, including many images of the Nechung oracle, certain inscriptions and visits to monasteries and historical sites as well as scenes with officials on a swing. Some of the images are clearly related to the Nechung Oracle ceremony that took place on the 8th Day of the 5th Month of the Tibetan Year of 1944, some contain images of Major James Guthrie who took up the post of Civil Surgeon Bhutan and Tibet, spending some considerable time in Lhasa, in March 1945 [see Tibet and the British Raj, Alex McKay, Richmond: Curzon Press, 1997, p.237] and many images have been dated on the back by Richardson to 1946. They also include images of the Samye inscription pillar, which Richardson states that he photographed in 1949 [ A Corpus of Early Tibetan Inscriptions , Royal Asiatic Society, James G. Forlong Series, No. XXIX, Hertford: Stephen Austin & Sons Ltd, 1985, p.26] [MS 17/12/2005]