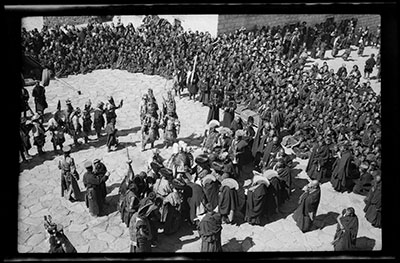 The Karmashar Oracle at Sera monastery. He is being attended by monks and lay officials. Crowds of monks are seated and standing on the fringes of the area watching. There is a group of four masked dancers in the centre of the image.

Manual Catalogues - Richardson's Handlist - 'Vol. Album 'A' 21-48 'Tshog-mchod Gser-'phreng Other photographs in Album C os 34-47. The Tshog mchod was instituted by Samgs-rgyas Rgya-mtsho in memory of the Vth Dalai Lama. The Gser-'phreng procession is said to represent a dream the Dalai Lama had. ... 51. A dance at Se-ra monastery in prescence of the Karma-shar oracle, whose headdress can be seen in the foreground. He is the oracle connected with Sera and visits it on the 15th of the 6th month at the 'Dzam-gling spyi bsangs.' [KC 20/9/2006]