Monks with masks at Western Gate during Sertreng festival 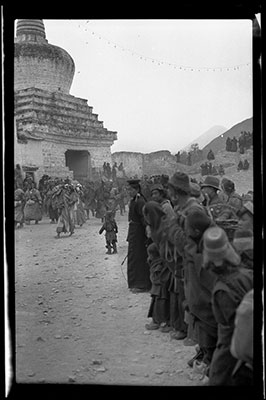 Monks with masks and ornate headdresses passing in procession through the Western Gate of Lhasa during the Sertreng festival held on the 30th day of the second Tibetan month. Crowds look on.

Manual Catalogues - Richardson's Handlist - 'Vol. Album 'A' 21-48 'Tshog-mchod Gser-'phreng Other photographs in Album C os 34-47. The Tshog mchod was instituted by Samgs-rgyas Rgya-mtsho in memory of the Vth Dalai Lama. The Gser-'phreng procession is said to represent a dream the Dalai Lama had. 35-9. The Procession at the Western Gate.