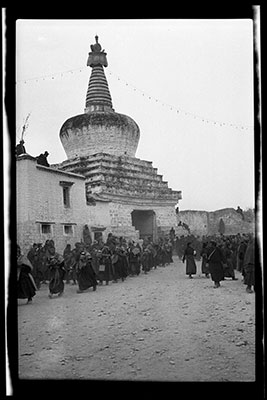 Monks in procession walking through the Western Gate (Pargo Kaling)in Lhasa during the Sertreng Festival on the 30th day of the second Tibetan month. They are holding ritual objects in their hands and onlookers are standing nearby.

Manual Catalogues - Richardson's Handlist - 'Vol. Album 'A' 21-48 'Tshog-mchod Gser-'phreng Other photographs in Album C nos 34-47. The Tshog mchod was instituted by Samgs-rgyas Rgya-mtsho in memory of the Vth Dalai Lama. The Gser-'phreng procession is said to represent a dream the Dalai Lama had. 35-9. The Procession at the Western Gate.