Monks and officials, Sertreng festival below the Potala 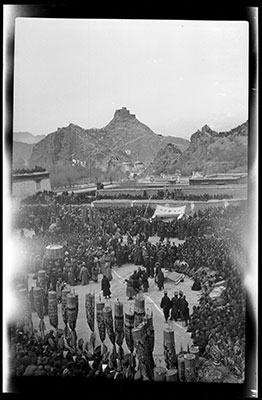 The open space at the west end of the Sho precinct under which lie the state granaries at the time of the Sertreng (tshogs mcod gser spreng) festival on the 30th day of the second Tibetan month. The space is filled with monks, officials and onlookers and Chakpori hill may be seen in the distance. In the foreground there is a line of monks holding banners and on the left there is a ceremonial umbrella which is being held above the Nechung Oracle.