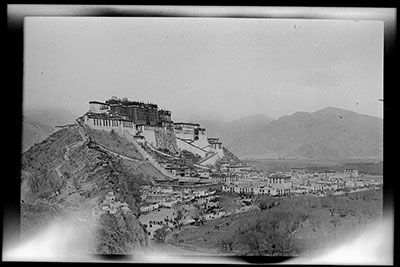 The Potala at the time of the Sertreng ceremony which took place on the 30th day of the second Tibetan month. The southern face of the Potala is decorated with the Koku "silk image" banner consisting of two panels. In the centre of each is a huge figure of a Buddha surrounded by many deities and bodhisattvas. The Shol area can be seen at the base of the Potala. This photograph was taken from the Chakpori hill. The image has light damage in the bottom left hand corner.

Other Information - Background: Richardson describes the Sertreng ceremony in Ceremonies of the Lhasa Year, 1993, London, Serindia Publications, pp. 74-81. " ... a spectacular ceremony, the Sertreng, in which hundreds of participants marched round the Potala with banners, religious objects and music. ... the Koku - "The Silk Image" - a great appliqué banner which covers the lower face of he Potala for a space of some 75 by 40 feet. It consists of two panels, one rather larger than the other; in the centre of which is a huge figure of the Buddha surrounded by many deities and bodhisattvas. The privilege of hauling it up is enjoyed by the monks of the Pempora college of Drepung. ..." [KC 12/8/2006]