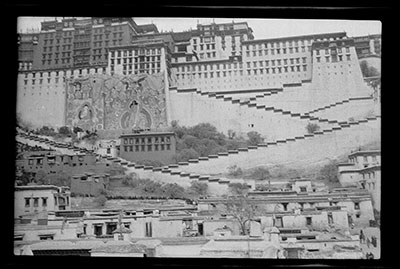 The Potala at the time of the Sertreng (tshogs mchod ser spreng) ceremony which took place on the 30th day of the second Tibetan month. The southern face of the building is decorated with the huge Koku "silk image" banner consisting of two panels. In the centre of each is a huge figure of a Buddha surrounded by many deities and bodhisattvas. The buildings of the Shol district of Lhasa may be seen at the base of the Potala.