Crowds at Potala and Koku at Sertreng ceremony 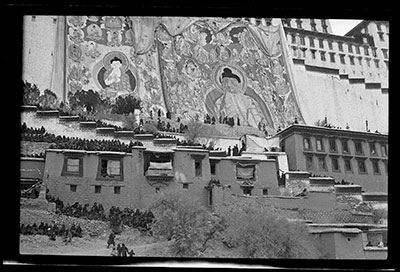 Groups of people gathered on the great stairway leading down from the Potala for the Sertreng (ser spreng) ceremony which took place on the 30th day of the second Tibetan month. Crowds are also gathered on roofs of building at base of the hill. The southern face of the building is decorated with the huge Koku "silk image" banner consisting of two panels. In the centre of each is a huge figure of a Buddha surrounded by many deities and bodhisattvas.

Manual Catalogues - Richardson's Handlist - 'Vol. Album 'A' 21-48 'Tshog-mchod Gser-'phreng Other photographs in Album C nos 34-47. The Tshog mchod was instituted by Samgs-rgyas Rgya-mtsho in memory of the Vth Dalai Lama. The Gser-'phreng procession is said to represent a dream the Dalai Lama had. 21. the great banner on the Potala. [KC 17/09/2006]