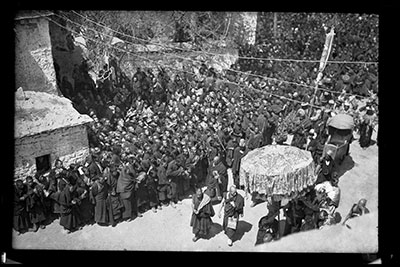 A group of monks lead the Nechung Oracle walking beneath a ceremonial umbrella away from the Jokhang along the Barkhor lined with crowds of monks and spectators during the Lugong ceremony which took part on the 29th day of the second Tibetan month. His sedan chair is being carried behind him.

Manual Catalogues - Richardson's handlist Album 'A' - "Nos 1-20 illustrate the Scapegoat ceremony,the Glud-'gong rgyal-po , on the 29th day of the second month. no.2 The Kashag are seated in a balcony overlooking the courtyard in front of the Jokhang; and the Zhal-ngo -the Proctors of Drepung- are seated on the north side of the courtyard. The ceremony starts with a dance by Black Hat "magician" dancers. No. 6 Long trumpets, in the foreground, sound a summons and the scapegoats, two men dressed in half their face painted black and half white, run in to a great noise of clapping and whistling; they dance round the courtyard. The two have been chosen some time before and are allowed a great deal of liberty for some days before the ceremony when they demand food and money from the shopkeepers and passers-by who give for the sake of having their ill luck removed. While they dance money is thrown to them and bags of grain are offered to urge them to go away. One of the black-hatted dancers challenges the scapegoat to debate the merits of the doctrine and eventually it is decided to settle the dispute by casting dice with the Byang chub glong Abbot. This is done; and as the scapegoat's dice are all ones and the abbots are sixes, the result is a foregone conclusion. Nos 7-9 show that part of the ceremony. When the scapegoats lose, they are driven out: one goes to the north; the other, the more important, and probably of a long-standing tradition,goes to Samye. Formerly he spent the night in a terrifying cell there and is said usually to have died. 10,11,12 show the scapegoat leaving; the crowd throw money to him wrapped in white cloth. It is a chance to get rid of all bad money. (no 13 is missing) No. 14 When the scapegoat has gone, the trumpets sound another summons and No.15, a band of protectors come out to chase the scapegoats and the evil away. (16 also) No.17. a gtor-ma is then brought out and nos 19,20, the Gnas-chung, State Oracle, also comes to drive the scapegoats away (cf. no 64 in Album 1)"