Lugong leaving the Jokhang with entourage 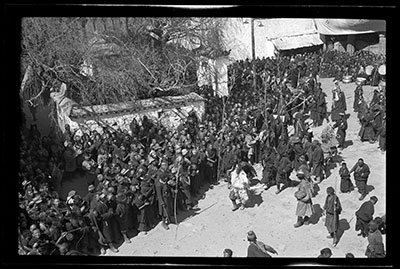 One of the Lugong in heavy goatskin robes and with is face painted half white and half black leaving the courtyard of the Jokhang brandishing a black yak tail. There are monks with long sticks around him. A torma (gtor ma) of brushwood and sheep's entrails is being carried behind him. The occasion is the ceremony of the Lugong gyalpo (glud 'gong rgyal po) which took place on the 29th day of the second Tibetan month.