Lugong walking along the Barkhor with entourage 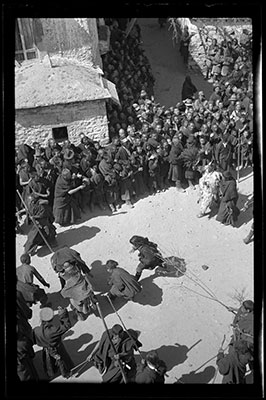 One of the Lugong in heavy goatskin robes and with his face painted half white and half black walking along the Barkhor brandishing a black yak tail. There are monks with long sticks around him. Some of his entourage are running in front of him picking up money which people are throwing to the Lugong. The occasion is the ceremony of the Lugong gyalpo (glud 'gong rgyal po) which took place on the 29th day of the second Tibetan month.

Research publication - Hugh Richardson, Ceremonies of the Lhasa Year, 1993, London: Serindia Publications, p.66, 'The servants of the Lugong Gyalpo gather up money thrown to him.'