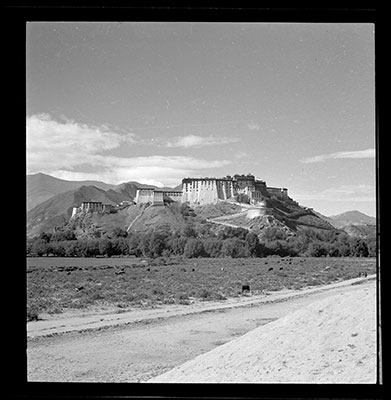 The Potala from the northeast. A clearly defined track along which people are walking may be seen in the foreground. Alongside the track there is an irrigation canal and cattle are grazing in the sandy meadow.

Other Information - Dates: Other prints in the collection with ‘609’ Red batch numbers have been identified as having been taken in 1c.1938 and there does seem to be a relationship between the batch numbers across different prints - although this relationship may be just between 6x9 and 6x4.5 images and needs to be further explored [MS 22/12/2005]