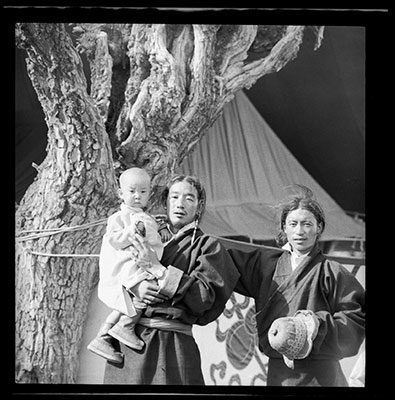 Ngari Rinpoche, Tenzin Choegyal, (b.1946) in the arms of a servant. He is about two years old, has a shaven head and wearing a robe of light-coloured silk and felt boots. There is a man on the right holding the Rinpoche's brocade hat. There is a tree and an appliqué tent in the background.

Other Information - Biography: Ngari Rinpoche is the youngest brother of the Dalai Lama born in Lhasa in 1946. He was recognised as Ngari Rinpoche, an incarnation of the spiritual leader of several monasteries in Ngari, a large region of western Tibet. [KC 26/6/2006]

Other Information - Biography: Jetsun Pema, the Dalai Lama's sister recalls her little brother in Tibet My Story, London: Element , 1998 pp.41-2, "At the same time, another reincarnation was living in our house: my youngest brother, Tenzin Choegal, a rinpoche or spiritual master to whom we also paid great respect. He, however, shared our everday life and was sometimes very mischievous. At meal times, he did not think twice about getting down from his chair and joining us to be naughty, much to his tutor's distress. ... Everyone let him do exactly what he wanted, because of his position as a rinpoche." [KC 26/6/2006]