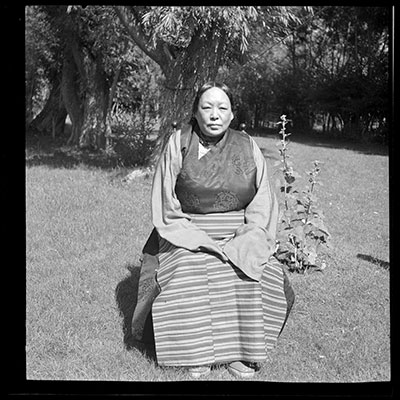 Lhalu Lhacham seated on chair in a garden. She is wearing a silk robe, a striped apron and felt boots.

Research publication - Clare Harris and Tsering Shakya, Seeing Lhasa, 2003, Chicago: Serindia Publications, p. 75. "Portrait of Lascham [sic] Lhalu in a garden. Gould notes that she was 'A member of high society ... connected by birth with the two previous Dalai Lamas, [and] who live on her estate a mile off. In 1904 it had been the headquarters of the Younghusband Expedition to Lhasa. One of the events of the Lhasa season was an annual luncheon party which she gave to the Cabinet and other high officials. Her hospitality was so urgent that often the fate of at least a few of the guestsd was "Where I dines I sleeps". She had a fund of jokes and stories which were reputed to be broad. I doubt whether even in England men and women live on such natural and easy terms as in Tibet. (1957:236)"

Other Information - This image appeared in the 2003 Temporary Exhibition at the Pitt Rivers "Seeing Lhasa: British Depictions of the Tibetan Capital 1936-1947"